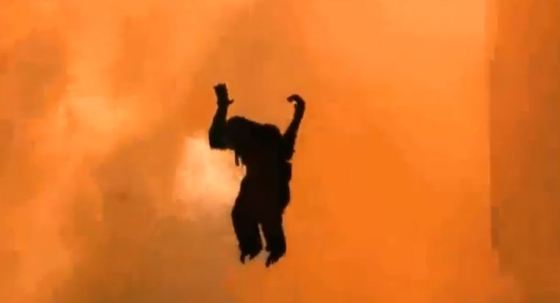 “For years man has enslaved the ape. Now the tables have turned!” promises the original subtext on the VHS cover for this mushy simian fecal matter. Not really. There are no enslaved humans in the film. Sorry. The updated DVD cover reads “An Experiment in Terror.” Experiment failed. It’s about as terrifying as most made-for-TV creature features.

Thanks to some unethical and typically arrogant experiments, this ape named Link has super-intelligence. In his spare time, he likes to stalk/torture/kill small animals and commit random, minor acts of arson, like all super-intelligent organisms do. So, it’s no surprise that the professor in charge of the experiments that gave Link his intellect decides Link should be euthanized despite his many years of service as a ridiculous, cigar smoking monkey-butler. Mysteriously, the professor vanishes shortly after making his intentions known like an idiot. I WONDER WHAT HAPPENED TO HIM.

Link does some charming monkey antics like wearing a tie and smoking. Actually, not “some”; he does A LOT of circus-comedy antics and is wearing cute little monkey outfits for most of the film. These are intended to be consolation moments for the glacial pace of the film, I suppose. “It’s okay nothing has happened in 25 minutes! Link ate a cookie with his foot!” you exclaim as you watch Link alone all by yourself.

He is an orangutan but the filmmakers dye him brown and pretend he is a “chimp.”

They edit together 1st person camera scenes of Link-carnage and footage of him knocking on windows and screeching to make it look like he is actually “turning tables” as promised on the cover. When this timid student fully grasps that Link has killed the professor and has other homicidal tendencies, Link holds her prisoner. For a good chunk of the movie, she is trapped in a house in the remote countryside with a murderous animal lurking around outside, just like the woman trapped in the Pinto in Cujo. All she can do now is wait until Link decides to murder her and juggle some oranges while doing a handstand or something.

While this girl is sniveling and pleading, “Please don’t turn the tables, Link! Please stop this experiment in terror,” Link inspires the other lab monkeys to break free and act like wild assholes like him. There is some full scale monkey-pandemonium, or rather, random shots edited together to create the illusion of an ape-revolt. Not enough poop-throwing in my opinion, which brought the film down from an A to a D.

I have to give the movie this: There some funny-as-fuck kills. My favorite is when Link rips some guy’s arm off through the mail slot.

I won’t say exactly how it happens, but Link suffers a long fall into a flaming abyss at the end of the flick. The effects for this are totally fucked; it is ANIMATED. Like, a cartoon. Link’s cartoon silhouette rotating in slow motion as it descends into a pit of fire looks like a scene from Disney’s Fantasia. Check out the image for this review and you’ll see what I mean. There is a “twist” at the end that you’ll see coming from miles away. I’ve smelled farts with more mystique and integrity.

You can watch the whole film for free on Youtube if your curiosity is just that morbid. 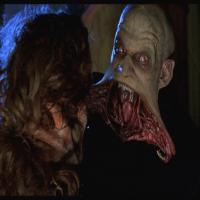 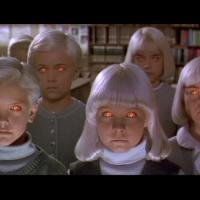 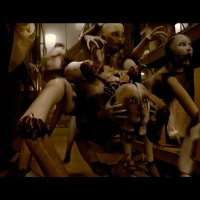 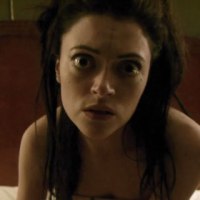 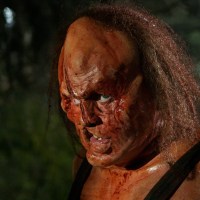 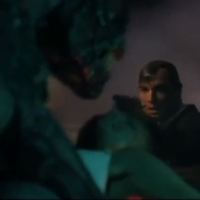