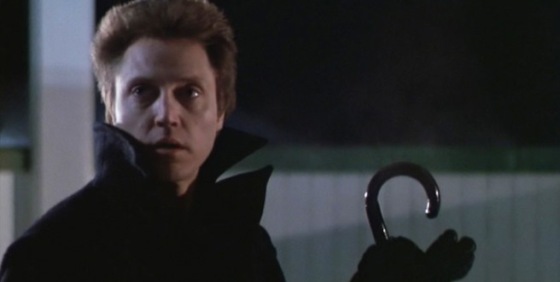 The Dead Zone: A-

This is a great horror movie and one of the best Stephen King adaptations ever made.

Christopher Walken plays a jolly English teacher who gets in a car accident and goes into a five-year coma. Somehow, this gives him psychic powers. His life is all fucked up because he was comatose all those years and these psychic powers help alienate the few people he has left because they all think he is a ranting wack-o with brain damage.

At the beginning of the movie, he reads “The Raven” to his class (I have audio of him reading the whole poem; so badass) and then assigns Sleepy Hollow (Walken of course, went on to play the Headless Horseman in Burton’s version). I think you are supposed to remember this later in the film. “The Raven” is about a really lonely guy who thinks a bird is bringing him supernatural messages; Sleepy Hollow is about a terrorized English teacher. His character fits well with this: an abandoned English teacher who gets supernatural “visions” of the future, visions that only bring him pain. Walken plays it straight; no garbled Walken-talk or deranged facial expressions.

Walken only uses his powers for good, saving lives and even helping the local sheriff solve a murder case. I like that the movie isn’t about the origin of his superpowers and how they work, but rather about what to do with the power that you have. This Spidermanian theme is at the heart of the film’s conflict: Walken meets a politician named Stillson who is running for senate. Stillson is a real piece of shit (in the book, one of the first things you read about him is this time he killed a dog for fun). In Stillson’s future, he becomes president and authorizes a nuclear holocaust just because he wants to be remembered in history books (depicted in a hilarious scene where Stillson is screaming like a lunatic while some absolutely inappropriate/cartoonish oboe music plays in the background). Stillson seems to “know” that this is his destiny and Walken has to decide if he wants to assassinate this prick or what. So what you get is this guy who only wants to use his powers to help people vs. this guy who wants to use his powers to incinerate people.

Cronenberg directs this movie and but it has zero crazy-Cronenberg carnage. Even though this movie is not saturated in gore and violence, it never seems slow. There is one scene where a guy lethally head-butts a pair of scissors though; what a fucking awful way to end it all.

Ultimately, the developed characters and the theme are what make this movie great. You actually feel really bad for Walken’s character and want him to succeed and you want to choke Stillson the whole time. Watch this if you think you would like a Stephen King thriller that is more about suspense than grotesque monsters.

Dr. Emil Hobbs thinks that humans have become too civilized and we need to embrace our inner brutality. I’m not sure, but this might be a reference to the philosopher Thomas Hobbes, who thought that deep down, humans were all ruthless animals.

Dr. Hobbs is conducting some medical experiments to make his philosophy a reality that some might consider unethical; he gets naked, strangles people, cuts them open vertically, and dumps potions on their guts. The potions make cool smoke like dry ice. Also, the potions make these slug-looking parasites grow in the dead bodies. These parasites leave the host body when they are big enough, moving on to infect the living. The infected become zombies who, instead of biting people, hug, kiss, and rape people. If you get raped by a raper-zombie, you become a raper-zombie too. And those are the bad guys in the movie: some sex-slugs and some raper-zombies. I’m not sure, but this could be a commentary on the residue of sexual paranoia left behind from generations of North American Puritanism. Could be.

Anyway, about those slugs. Here’s a breakdown of the holes they can/cannot get into:

Maybe I’m looking into this a little too closely, but I think these sex slugs might be allegorical symbols for sexually transmitted diseases. Who knows.

Being a raper-zombie looks even worse than being a biter-zombie. Biter-zombies don’t bite other biter-zombies, but raper-zombies do rape other raper-zombies. How exhausting! Biter-zombies get to relax most of the time, only getting excited when there is a non-zombie around, but raper-zombies are constantly raping. I want you to think about that when you see all these good looking women in the movie who have sex-slugs in them. You might think “Oh, well, she can do her raper-zombie thing to me. I’m okay with that!” but just remember, that means you are signing up for a lifetime of grueling rape. I’m starting to think that this might be a thinly-veiled metaphor satirizing the temptation associated with the “Free Love” movement. I dunno. Just a thought.

This is a Cronenberg movie set in a videogame-obsessed future where reality and the virtual reality of games have become indistinguishable from one another.

Game consoles look like deflated breasts with umbilical cords which you can use to connect your nervous system and consciousness to the virtual world of the game. You actually play the breasts like a controller. Imagine an Alien face-hugger with tits that plugs into your back. Multiple scenes of Jude Law groping a melted mannequin torso.

I do it at Macy’s, and I get banned from the mall. Jude Law does it in this movie, and it’s “art.”

eXistenZ came out a couple of weeks after The Matrix and they share the philosophical theme of mankind’s struggle to define reality while our relationship with technology becomes more singular. Both films have us winding up in manufactured realities, but where they differ is their imagining of how we get there.

In The Matrix, sentient robots plug humans into a virtual reality against their will. In eXistenZ, we are so bored with reality that we plug ourselves into virtual worlds for entertainment. Both movies explore our increasingly intimate relationship with technology and our hubris from believing that we are on the dominant end of this relationship.

I think eXistenZ got overlooked because there are no stars from Point Break firing handguns in slow-motion. The movie is less sensational than The Matrix. It’s also way grosser; it has the aesthetic of Naked Lunch and Videodrome. Lots of slimy creatures and inappropriate tonguing of techno-organic private parts. Jude Law makes a working pistol out of the skeleton of a mutated salamander.

The overall look is a little clunky. You’ll immediately think to yourself, “Yep. That’s what people in the 90’s thought the future would be like.”

What about the plot? It’s a lot like Inception; multiple people can “plug in” to these machines and share the “game play,” much like the dream-sharing machine in Inception. Once in the game world, you can plug into another machine, taking you to another game world within the game world, from which you can plug into another machine, etc. just like the layered “dreams within dreams” in Inception. As a matter of fact, Inception ripped this movie off big time. What the hell, Inception?!

Get ready for you head to explode: A game designer is almost assassinated and Jude Law has to go into game land with her via a controller-port installed in his spinal cord by Willem Dafoe the gas station mechanic. Then they have to go a few layers further into game worlds and old Bilbo Baggins with a Russian accent has to perform bootleg surgery on the Lombard region of a game system. And there is an anti-gaming cult that commits homicides. Jude Law licks mysterious holes and guts lots of fish. It all works out. 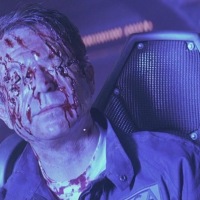 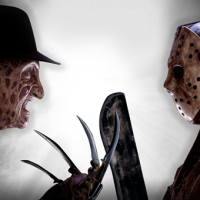