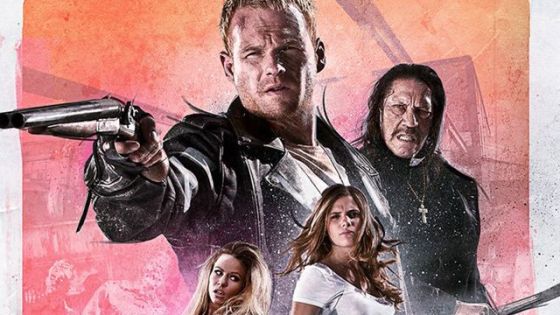 In a near-future post-apocalyptic wasteland, zombies with varying degrees of intelligence roam the earth feasting on the flesh of the living. Unfortunately, they don’t feast on our rugged anti-hero protagonist, Hunter, a guy with a perpetual 5 o’clock shadow and forced-as-fuck gritty voice. He must have gone to Michael Biehn’s Acting Academy.

If you like voice-overs where some loser is trying as hard as he can to sound tough, maybe you should stop reading this now and just go buy this movie. Hunter can’t stop talking about himself. For every fact he narrates about zombies, he has to follow it up with an annoying fact about himself to remind the audience of what an anti-hero nomad he is. “Some of the zombies are smart” is followed by “I love tequila.” “It all started with this street drug called Natas” is followed by “I can’t let go of the past.” You are expected to sit through this while he mashes along dirt roads in a Camero, squinting like Paul Walker, while a soundtrack of emotional alt-rock blares.

I swear to God I’m not making this up: The fucking alt-rock and dirt roads actually go away for a minute… so he can run over a zombie with his Camero and… as he hits the windshield wipers… the alt-rock blares and he peels out on another dirt road.

While I could write a fucking thesis about why Hunter sucks as a character, and the over-use of dirt roads and alt-rock, I need to focus on the movie’s style/aesthetic as a whole. This film tries SO HARD to emulate a neo-Grindhouse (like from Death-Proof and Machete) feel and it fails SO FUCKING BADLY. There’s artificial grit and blips arbitrarily added to a bunch of the cinematography. Sometimes a whip sound-effect happens and large block letters pop up on the screen to show the name of a character to the audience. “CRACK! – HUNTER.”  “CRACK! – FAST LANE DEBBIE.” There are two-dimensional female characters in jean shorts. All the contrast is cranked like your ex-girlfriend’s Instagram filter. The execution of EVERY EVENT is so fucking corny; the whole film has the timing of a kid’s cereal commercial.

They got Trejo to show up in the movie, and they feature him prominently on the cover art, but their budget only allowed him to deliver a handful of sentences and do some disappointing slow-motion shirtless axe-wielding.

I recommend this movie for dirt road enthusiasts.

A lot of Grindhouse films use this tactic of showing a totally insane, out of context prologue scene before or during the opening credits in order to cultivate some buy-in from the audience. That way, people will hopefully sit through all sorts of low budget garbage with the hopes of finding an explanation/resolution for the prologue or seeing something like the prologue repeated. Usually, the proverbial budget/action “wad” is blown during these introductory scenes and what makes up the other 98% of the movie is semi-torturous in its lameness.

This movie has two intro scenes:

1. A dude in red robes and an awesome looking goat mask leads a Satanic ritual in which a panicking blonde is stripped naked and sacrificed to Satan. All these Jawa looking motherfuckers hold torches and chant around him.

2. This dickhead yuppie named Steven tries to rape some babe in his bedroom. When she successfully repels him, he acts like everything’s cool and walks her to the front door. Then he slams her head in the door until she dies. Lots of red corn syrup and synth stabs.

The credits end. The movie begins. 19 year old Catherine is out for a nice drive with her mom and dad. They are going to visit her Uncle Alex (played by the same guy who was Alfred in the Michael Keaton Batman movies) at his beautiful home out in the country. The car crashes and her parents die.  Wah-wah!

Uncle Alex finds the traumatized, physically unscathed Catherine at the scene of the crash and takes her under his wing. He drives her home and gives her a tranquilizer so she will stop her stupid whining about her stupid dead parents. She wakes up and we find out that Alex’s son, Catherine’s cousin, is that door-slamming asshole Steven!

The movie is a Rosemary’s Baby rip-off. Catherine thinks she is Uncle Alex’s guest, but really, she is his prisoner; Uncle Alex is keeping her doped up on tranquilizers and grooming her for a Satanic sacrifice (like the blonde-Jawa-torch scene from the beginning) which is scheduled for a few days later on her 20th birthday. Steven is in on it too. While he seduces Catherine for some cringe-worthy cousin incest action, Uncle Alex uses voodoo to kill her BF who is just minding his own business back in the city. Fucking asshole, Alfred! I mean, Alex! There are other cultists helping them out as well.

The sub-plots are off the hook. Catherine has an inconsistent Shining-like psychic power. Steven’s mom was the sacrificed blonde from the prologue. Catherine’s ancestor was molested/tortured/murdered by Puritans. Catherine’s dead dad was in on it the whole time.

There aren’t anymore door-related deaths. There’s an eyeball shanking and ol’ Steven stabs some woman in the mouth with a piece of mirror. The movie is pretty boring, low budget Grindhouse with all the goofy music and shitty acting you could ever wish for.

Stay away from this movie like your life depends on it. If you have a soft spot for broke-as-fuck grindhouse movies with plots about as consistent as wet toilet paper, maybe you’ll get something out of this, but you should be ashamed of yourself if you do.

Some eye-patch wearing, Scooby-Doo villain looking motherfucker broods around in the back room of his wax museum concocting potions that he can use to turn Hollywood stars into wax statues so he can display them in his museum and get all excited about it. Actually, they don’t even turn into wax statues; the potions just induce a paralytic state that makes these movie stars look like wax statues of movie stars when really they are just catatonic movie stars, frozen like wax statues. He ensnares a few stars who have wronged him in the past and props them up in his museum. The old studio he worked for had a little party at which his boss purposely disfigured his face for life. Instead of just getting over it like a man, he becomes a mad scientist / wax statue ringmaster who wears, what appears to be, clothing from that Devo video and he abducts studio stars/personnel one by one.

I know what you’re thinking: “Oh, sick! Does he, like, molest them, or jerk off on them, or at least lick them like Sarah Connor’s hospital guard in Terminator 2?!” Nope. He just freezes them and then chills in his lab, which is full of bubbling test tubes and weird tubes and whatnot.

The captured stars are frozen statues, trapped on their respective podiums… or are they? Just when you think you understand the STUPID concept of pretend-wax incapacitated movie stars, all of a sudden they are robots or zombies or hypnotized or something and they follow the orders of the villain. Basically all of them act like an obedient Keanu Reeves. This potion makes the date rape drug look like Tylenol.

The characters are ridiculous and the writing is some of the laziest I’ve ever seen. They try to work in a little sexiness and are not very creative about it. Our hideously scarred villain, who looks like he is made of Michael Shannon and William Shatner DNA, makes out with this girl he is chasing OUT OF NOWHERE before shanking her. One minute she is terrified, but she succumbs to his (un)sexy advances.

The cops get a little suspicious and have inexcusable incompetence, even for a grindhouse movie. They fucking INSPECT the statues and still take forever to piece together what’s happening. There’s a snore-inducing car chase and no gore. The ending is (SURPRISE!) an anti-climactic cop out. 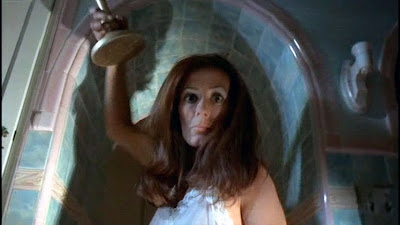 There is very little blood in Blood Mania. It would be like changing the title of Halloween to Coat Hanger Mania because of the one scene where Michael Myers is batting coat hangers out of the way when he’s trying to catch Jamie Lee Curtis in the closet.

This turd from the tail end of the grind house era begins with a blond woman with a noose around her neck running through the woods. She is in a nightgown that shows off her nipples and she’s running from some solemn motherfucker who appears to be walking after her, even though she’s running full blast. She falls down, screaming, and the opening credits conclude. The scene is never referenced again and we never learn who the fuck those people were. No blood by the way.

When the actual film opens, we see that this spoiled and very sexually hungry babe named Victoria hates her life because she spends all her time caring for her terminally ill dad, who is a total bedridden asshole. When she isn’t spooning him warm milk or whatever, she’s trying to get laid. She somehow fucks this up despite being an aggressive and reasonably attractive woman. In this one scene, she jumps in the pool topless and tries to seduce the pool boy, who runs away frightened as if she was a rattlesnake. Show me a pool boy who would do this in real life and I’ll eat my hat.

She has this really creepy fixation with her dad’s doctor, this Hasselhoff looking fella named Cooper, who also avoids her advances as he avoids trimming his sideburns. Cooper needs money because he’s being blackmailed for performing some illegal abortions back in the day. So Victoria comes up with a plan: Cooper bones her whenever she wants and she’ll poison her dad, inherit the estate, and give ol’ Coop the money to pay off his blackmailer. All the poor guy has to do is take the money, bang this wealthy heiress, and call it a day.

When Victoria, kills her dad, there is a little blood, but not “mania” levels. She makes him smell some poison in his sleep and then she, probably excited by the impending Cooper penis, chills in her dad’s room fondling her exposed breasts while he writhes around and dies. His mouth is red. That’s the blood. He dies watching his treacherous daughter twist her nipples right next to his bedpan. Bummer. Mania.

Cooper comes home and sees what’s happened. He starts to dispose of the corpse and then in the span of like sixty seconds, some crazy shit happens. We see that Victoria’s painting is of Cooper holding a skeleton and, suddenly, the ghost of the dead sister appears in the corner of the room. End of film.

You can’t have high expectations when you watch something like this. If you are ever in the mood to watch soft-core pornography with a ghost of a plot, check it out.