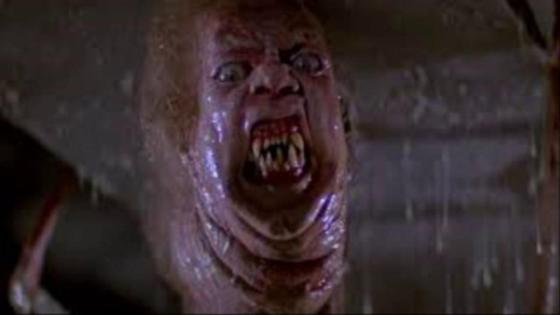 This movie is about an Arctic research scientist and flamethrower enthusiast named Kurt Russell fighting a homicidal alien. It’s also about the Cold War. It’s also one of my favorite movies ever, so I’m not fucking around here.

The Thing came out in 1982, before I was born, and was one of the first rated-R horror movies I ever saw. It was made a few years after Alien and the two share the same dark atmosphere of isolation and paranoia although I would argue The Thing is scarier because the monster’s infiltration is much more intimate than in Alien. Imagine that radar scene from Alien, but now it is 80 minutes long!

The biology of the Thing is sort of confusing; it can mimic other organisms, but it can also “absorb” them, assimilating living things cell-by-cell until the organism has become a part of the Thing. The Thing is one sentient creature, but each cell has an independent survival instinct and is able to exist independently from the central Thing. It’s a hive-mind alien with self-replicating abilities. I don’t know if I’m making any sense; Wilford Brimley does a better job explaining it in the movie with Atari-esque computer models that represent the alien microbiology.

Since the Thing can shapeshift and absorb its prey, it decides that the best thing to do is enter the base disguised as a stray dog (in Antarctica?) and assimilate the crew one-by-one. All it has to do is get a guy alone in a room, and then it can Thing-ify him.

The Thing is also a communist; it is a foreign power posing as your neighbor. The 1950’s Cold War paranoia that barbeque owners Bill and Natalie next door might secretly be KGB operatives Boris and Natalia is ballooned to intergalactic proportions. And while the Thing personifies American fears of communism (like forced “equality,” total homogenous conformity, and just being foreign), Kurt Russell’s handsome ass represents the rugged individualism of blue blooded Americans. He looks more like Wild Bill Hickok than a fucking Arctic research scientist (he even wears a cowboy hat for much of the movie).

The Cold War undertones are pretty consistent, even to the point where, in the final act, K-Train is ready for some Mutually Assured Destruction. This part is foreshadowed brilliantly at the beginning of the movie when Russell loses at computer chess and responds by dumping a glass of scotch on the motherboard. The Thing is content executing a methodical takedown of the base, calculating its moves and taking people (pieces) one at a time, but Russell decides that the best move might be to torch the entire base; if he can’t get the Thing in checkmate, he wants an incendiary stalemate. Take that, you fucking pinko!

Some people think that there is no Cold War allegory and this is just a movie about an alien and Kurt Russell and glasses of scotch and flamethrowers. Pay no attention to these people. They will go away if you ignore them. I am so all-in with this allegory, that I think you could make the argument that it has a timeless quality; to the original audience of the film, the Thing is a communist. Or maybe it is an AIDS patient. Now, he’s a terrorist cell. “Snake Plissken Fights a Monster, The End” isn’t good enough. There’s more here.

Critics of the movie will also pick apart Kurt Russell’s ham-handed Thing-hunting and, yeah okay, he is pretty Kurt Russelly the whole time, I’ll give you that. But who did you want in there instead? This is The All-American Computer who Wore Tennis Shoes! Sorry stool admonisher Clint fucking Eastwood wasn’t available to squint at the Thing for 90 minutes and instead you are stuck with a guy who has done a pretty good job making a career out of running around yelling like a lunatic.

The film has legitimately revolting special effects, probably the most impressive horror/sci-fi makeup ever. If you read some other reviews for the movie, they will likely spend more time on it than I did, which is the right thing to do. For instance, you know that scene with the arms? They got a guy who has no arms for that scene. And it’s fucking gross. There is dismemberment, reanimation, people getting sprayed with parasitic Thing goo, and all sorts of other horrifying shit.

I cannot recommend this movie enough. See it right away.