When a man sits down to watch a rated-R horror movie, he does so with the understanding that breasts and/or full-frontal nudity may be part of the deal. About 90% of the scenes in Nurse 3D feature the full frontal nudity of physically flawless people, many of whom are medical professionals. The 10% of the movie that wasn’t that was a cliche grab bag.

A hot nurse, Abby (played by Paz de la Huerta from Boardwalk Empire), hates guys who cheat on their wives so she entraps married guys by seducing them and then later, she kills them, usually while wearing only a bra or nothing. There’s a real Dexter vibe to this formula because she’s killing “bad” guys and we are treated to her witty voice-overs as she does it.

There are other characters whose function is to be oblivious or sexy, or oblivious and sexy. Katrina Bowden from 30 Rock plays another sexy nurse. Kathleen Turner is in it. I can’t even describe the ruckus that occurred when my roomful of friends saw that Judd Nelson was in the movie. He gets his arm cut off with a bone saw. The world is an imperfect place.

I fucking hate CGI blood and this movie was CGI drowning in it. Not just CGI blood either; there are CGI weapons that make CGI wounds that make the CGI blood. I watched it in 2D so maybe I missed out on some really life-changing moments where a CGI scalpel “jumps out” at me but – maybe I’m being cynical here – I doubt it.

There’s a really bizarre and consuming subplot that sort of evolves into the main plot. Abby develops a crush on Katrina Bowden, so she date rapes her and takes a billion blackmail pics. This is an excuse for gratuitous/mesmerizing boobs, ass, side-boob, side-ass, and vagina footage. We have the date rape scene, dramatic crying in the shower scene, looking at the date rape pictures scene, arguing in bra and panties the morning after the date rape scene, etc. If you wanted to watch that sort of thing, you certainly don’t need to go to Nurse 3D, a movie that simultaneously tortures you with predictable CGI carnage.

If you want someone to argue with you in their underwear, let me know. I don’t have much going on these days.

The movie reminded me more of one of those softcore semi-porn movies that Cinemax shows at midnight than a horror movie. There is a really violent scene where Abby snaps and kills a bunch of people in the ICU but, again, it’s a CGI-fest that really takes you out of the movie.

If you are really lonely, watch this film. 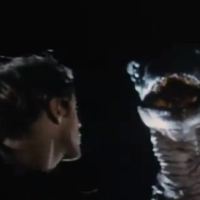