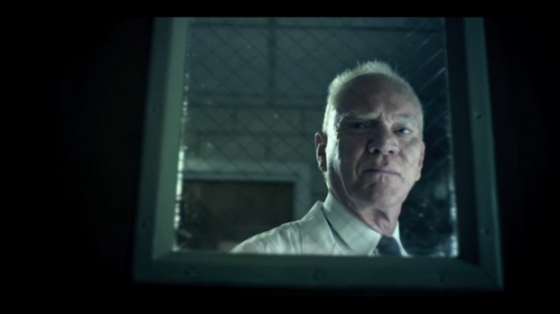 This is an anthology movie that has three separate tales about insanity presented to us by Malcolm McDowell who plays the “cryptkeeper” character and the head doctor of a sanitarium. In between each tale, he gives us a cryptic monologue about insanity. Who is he to talk? Have you seen the movies he’s been in lately?

Case 1 is about a crazy artist who likes to talk to his dolls. Sometimes the dolls tell him to murder, so he murders. The guy looks like Sideshow Bob and he gets REALLY intense while bickering with his dolls. This was the worst tale in the anthology. Most of the time he is having REALLY intricate arguments with the dolls and the audience can’t even hear the fucking dolls. He pushes Freddy Kruger off of a building and he lynches some woman whose boobs are exposed within the first 15 minutes of the film.

Case 2 is a lot more fun. It’s about this nerdy kid named Steven. His teacher at his Catholic school is the brunette Mean Girl and his dad is an alcoholic who likes to beat/molest him. If that wasn’t bad enough, he’s also being stalked by a giant homeless looking dude who wears a hood because his face looks like 1990’s Venom from the Spiderman comics. I won’t tell you what happens but it does involve Steven stuck in a burlap sack and does NOT involve his dad having a change of heart regarding rape/beating.

Case 3 is about Lou Diamond FUCKING Phillips! Through a series of flashbacks we see he was a professor / doomsday prepper who believed in the 2012 apocalypse nonsense. He lost his job because all of his lectures devolved to his crazy rambling/prophesying and he lost his family because he started ignoring them and building an underground bunker. Flash forward and we see him chilling in his bunker listening to opera music, talking into a tape recorder, doing push-ups, and other stuff a psycho would do in a bunker. He thinks he has to hide down there because up top, everyone is dead and there are aliens. Maybe he really is hiding from aliens. Or maybe he killed his family and he’s hiding from the truth. DUN DUN DUUUUN! His acting is actually really good and the guy looks great at 51.

Overall nothing special but the movie keeps you interested. No explicit carnage or really any on-screen graphic violence. The soundtrack is LOUD AS FUCK. I kept waiting for McDowell to ask some cliche rhetorical questions about society; “aren’t we all trapped in our own cell?” kind of thing. Never happened. So I guess the movie was surprising and unpredictable too.