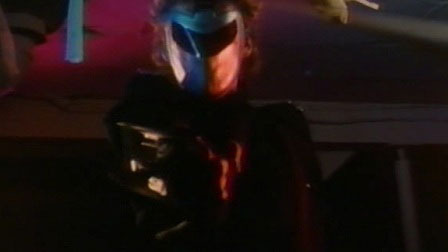 This is what the hero of the movie says the first time he appears in costume. That line is way more awesome than “I’m Batman” or Superman’s “A friend”. But here’s the problem: the hero is A) Not a Robot. B) Not a Ninja and C) Does not kick ass, and in fact gets beaten to death by criminals at the end of the movie.

Spoilers? No-because the whole time you’re watching the movie you’re thinking “This idiot is going to get killed….and that’s just fine with me”. As a plus, the actor is very handsome. I sincerely hope he’s enjoying his life as a bartender in West Hollywood and has pride in having this movie under his belt.

The Robot Ninja is this dude who decides that he should do good things for the community, and then goes out at night and gets his ass kicked by muggers and black people. A lot of times. Then he starts shoving sheet metal into his wounds. This does not make him stronger. He never learns Ninjitsu or gets a computer brain. He just covers his wounds with sheet metal.

The Robot Ninja is a comic book artist by day. Besides his night life ineptly fighting crime, he starts drawing comics that predict the future. At the end, he illustrates the cause of his own death and goes and gets killed. And he’s such an idiot, it makes total sense. And he doesn’t just die, he bleeds out while drawing his last comic-which is of him being dead. Roll credits. Then you can turn it off and do something else.

Bruce Ward (Robin from the 60’s Batman show) plays his boss and is all fat and gay and shit, which I dug. At least watch until Robin starts yelling and then injures his own hand. It’s pretty funny.

Also, there’s this one criminal who is pretty awesome. You’ll know him when you see him. He’s a terrible actor but you can see he’s really trying to do a good job. I give him an E for effort, but an F in “not being shitty”, which makes him average. That seems fair to me.

All in all, this movie is entertaining because it’s ineptly made but you can tell that the people who made it were trying their best. Please join me in honoring Robin and all of these low achievers who brought us this shit-covered gem.